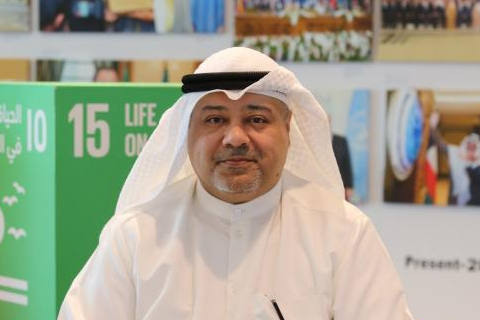 Secretary-General of the Supreme Council for Planning and Development

Government and Public Sector Experience, Khaled is currently serving as the Secretary-General of the Supreme Council for Planning and Development; and the National Director of the Country Program Action Plan with UNDP in the Government of Kuwait since (2016). Currently, he is a member of the Supreme Council of Education, the Supreme Council for Public Universities, the Public Authority for Industries, Kuwait Institute for Scientific Researches, the Public Authority for Housing Welfare, the National Fund for SME Development, the Public Authority for Applied Education and Training and The Arab Planning Institutes. He serves as a member in the Economic Reform team , Fiscal budgeting Frame, Kuwait University Mega Projects, Ozone Affairs and Climate Change, National Census 2020, Social Safety Net and Education-Labor Market alignments besides others national committee. Khaled leads the national efforts to implement the SDG Agenda 2030 and heads the delegates of Voluntary National Report presentation in the UN. He cofounded the Kuwait Women Distinguished Award (KDWA) and Kuwait Sustainable Development Award (KSDA). He received the “People First” Leader GCC HR Award in (2018) and featured in several local and international news and reports.

Khaled was the Assistant Secretary General for the Follow-up and Future Forecasting and the Acting Assistant Secretary General for Planning in the General Secretariat of the Supreme Council for Planning and Development (2015). During which he head the Consultants Selection Committee, board member of the Pubic Authority for Civil Information, Kuwait Master Plan 2040 executive committee, the Economic and Fiscal Reform monitoring committee.

He served as an Advisor for the Kuwait University strategic office (2005) and for the Minister of Planning and Development Affairs office (2013).

Academic Experience, Khaled received his PhD in chemical engineering (2000) from Northwestern University specialized on statistical mechanics of complex systems. He received his bachelor degree in chemical engineering (1993) from University of Toronto. Khaled started his career working in Water Resource Division in the Kuwait Institute for Scientific Researches before moving to Kuwait University to become Associate Professor of Chemical Engineering. He taught 30 different courses in engineering and management. Khaled has authored or co-authored more than 65 journals articles, book chapters, conference papers, a patent and a book in different fields. His primary interest is modeling complex systems and process optimization. Khaled and collaborators established SYNERGY, research group to study complex networks including social, biological and financial networks. He received the Best Teaching Award in Kuwait University (2009) and electronic courses award (2006).

Private Sector Experience, Khaled was the managing director and the chair of the board of the Construction Waste Recycle (BOT) project operated by the Environmental Preservation Industrial Company in Kuwait (2010-2013). He sat on several boards of industrial and consulting corporations in Kuwait such as Al-Dhow Environmental Projects Company, vice-chair and then a technical advisor of Arab International Industrial Projects and International Quarries Company, Focus Consultancy. Kuwait Industries Union featured him as one of the exceptional Industrialists (2011)

Consulting and Training Experience, Khaled serves as a consultant for Kuwait University Academic affairs offices on Kuwait University Strategy in (2005). Later he serves in as an Advisor of the Minister of Development Affair office in (2014). Khaled participated in many consulting projects with several organizations such as UNCC, KNFP, KPC, EPIC, MOE, KIU, CMA and many others He trained more than 1000 professionals and engineers in project management and leadership. He participated in more than 90 training courses since (2002) in the public and private sectors locally and regionally as well as internationally.

Professional Communities Experience, Khaled is a certified project management professional (PMP), PRINCE2 and a certified consulting engineer (CEng) as well as a certified GCC expert and commercial arbitrator. He is a senior member of American Institute for Chemical Engineers (1989) life-long member of Kuwait Society of Engineers (1993) Project Management Institute (2007) besides membership in several professional societies. Khaled cofounded, chair Kuwait Chemical and Petroleum Engineers league (2005), Kuwait Project Management Society (2015), Kuwait Innovation, and Technology Society (2018). He sits on the AUK’s College of Business Administration and Economics Advisory board (2016) and The Conference Board executive board (2018)

OBJECTIVE
To serve with excellence the academic, private and public sectors locally, regionally and worldwide.

2016 – Present General Secretarial of the Supreme Council for Planning, Kuwait

2015 – 2016 General Secretarial of the Supreme Council for Planning, Kuwait

• Sets up the business strategy and developing the corporate profile
• Proposes and market the business model and concepts
• Creates and implements the working business plan
• Develops the marketing strategy of the company
• Supports the middle management in consulting and training
• Packages new services and new products for launching in year 2013
• Monitors and controls the progress of the company
• Sign agreements with more than 15 international and regional companies
• Register and qualify the company as a vendor in CTC, KOGC, KEC, SOC and KNPC.
• Conducts project management, training and consulting services
• Affiliates with and represents several international and local consulting and training agencies.
• Signs MOUs with several colleges and universities worldwide
• Manages proposal submittals and implementations

• Owner representation of 4.8 M KD capital business
• Initiate a legal plan to acclaim and restructure the company
• Assess the manufacturing plant operational and management status
• Take bold and calculated steps toward the corrupted environment in the company

• Represent the major shareholder in the board of directors of 8 M KD capital business
• Manage and direct strategically the BOT project of construction waste recycle plant
• Organize and controlling the 140+ employees of the industrial recycle project
• Create Corporate Identity for the organization
• Set up and upgrading the corporate policy, procedures and bylaws
• Develop new products and services such as SDS and ECO-MIX
• Sign agency agreements with international environmental companies
• Speak in several environmental forums and panels regionally
• Assist in nominating EPIC as one of the best solid waste management company in GCC
• Enhance relations with the government officials
• Restructure of the recycle plant technically and administratively
• Optimize the operation of the industrial facilities
• Improve sales and marketing strategies
• Deal with major administrative and legal issues
• Improve recycle products quality through manufacturing optimization
• Increase the income of the company through receiving gate fee from incoming trucks
• Improve sales in a economically hit market during 2010-2012
• Register the company in Tire Recycle pre-qualification with Kuwait Municipality
• Manage the company to be awarded ISO 9001, ISO 14001 and ISO 18025

TRAINING COURSES
Since 2002, I provided more than 90 courses and workshops in several management and engineering area to train more than 1000 professionals, engineers and managers. The training courses or programs were conducted in collaboration with well-qualified trainers. Some of these courses were conducted in English and/or Arabic.