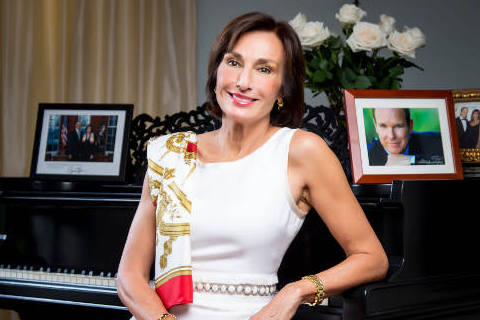 Monaco’s Ambassador to the United States and Canada

HER EXCELLENCY MAGUY MACCARIO DOYLE is Monaco’s Ambassador to the United States and Canada. She was appointed by His Serene Highness Prince Albert II on November 12, 2013 and presented her letters of credence to President Obama at The White House on December 3, 2013. She also serves as the Principality’s Ambassador to Canada having presented her credentials to Canada’s Governor General, H.E. David Johnston, in December 2014, and as Monaco’s Permanent Observer to the Organization of American States (OAS). In 2016 she was appointed Permanent Representative of the Principality of Monaco to ITSO (International Telecommunications Satellite Organization) and was subsequently elected as vice president to represent Region B, comprising 27 western European nations. Ambassador Maccario Doyle has served as the vice president of the Prince Albert II of Monaco Foundation-USA for the environment since 2006. She is also the president of the US chapter of the Princess Charlene of Monaco Foundation which was established in May 2016 in California. For more than two decades she was Monaco’s consul general in New York as well as the director of the Monaco Government Tourist Office for North America. In June 2017, Ambassador Maccario Doyle was appointed to the board of Grace-Penn Medicine, a new strategic alliance between UPenn Medicine
and Monaco’s Princess Grace Hospital.
A committed advocate for children and women’s issues, and a tireless worker on behalf of charitable and philanthropic endeavors, she is a long-standing member of both the Professional Advisory Board and the International Professional Advisory Board of St. Jude Children’s Research Hospital. Recently she initiated a very successful series of events to support and promote Monaco’s interest in space travel and exploration, earth sciences and new technology. Held in 2016, 2018 and June 2019 under the theme of “Pioneers and Innovators of Our Time”, the events each premiered an acclaimed documentary followed by panel discussions. National Geographic, Lockheed Martin, SSI-Monaco, and Venturi are some of the notable past partners, and participants have included NASA-trained astronauts (Apollo II’s Buzz Aldrin, Apollo 17 commander Gene Cernan, commander of multiple space shuttle missions Robert “Hoot” Gibson, ISS commander Michael Lopez-Alegria, and pioneering woman surgeon Rhea Seddon); aerospace pioneers (former NASA Administrator Charlie Bolden and former NASA Chief Scientist Ellen Stofan); sporting legends (Sir Jackie Stewart); and award-winning film makers (Rory Kennedy, Tom Jennings and Mark Craig).
In recognition for her services to the Principality of Monaco and the Princely Family, she was presented with the prestigious “Chevalier de l’Ordre de Saint-Charles” distinction by His Serene Highness Prince Rainier III of Monaco in 1996.